I drafted this post during the World Cup but I thought it would get lost in the shuffle, among all the posts about soccer. The title of the post is actually a double entendre. Attacking the goal can be read as seizing the chance to reach your objectives, but in this case I am making a counter argument to the general idea in Goldratt’s masterpiece, “The Goal”.

The Goal by Eliyahu Goldratt

I first heard about “The Goal” a long time ago when it was mentioned by Jeff Bezos, but it fell off my radar. A couple of months ago during my CSCP exam prep I met a Jonah. Brilliant guy and extremely charismatic. I was so enthralled by that meeting that I read The Goal in one day the following weekend.

Could not put the book down. What really made it real for me was the main character’s balance between work and his personal life. *Spoiler Alert* In the book, the author explains that the goal is to make money.

He puts it within the framework of a manufacturing facility… but in chapter five the author wants you to believe that the goal of every company is to make money.

The book was published in the mid 80s, about ten years before the term “Tripple bottom line” was coined by Elkington and about twenty years before the Sarbanes-Oxley Act – a bill created in reaction to the Enron, Tyco and WorldCom scandals.

Don’t get me wrong. The Goal is great book. I have already identified two bottlenecks at work and elevating them will probably be my main “thesis” when I work on my Six Sigma final project. However, after I put the book down I was really curious about something that isn’t really addressed… what ever happened to Alex Rogo’s two kids?

There is no debate nowadays that corporate alignment is crucial to the success of any company competing in a global market. If the goal of the company is as simple as “make money”, one can assume that the goal of every employee should also be to make money.

If you read my sticky post, “Why do we work?” you know that I completely disagree. For reasons that will become self evident in later posts… I really honed in on the relationship between the main character, Alex Rogo and his son.

Alex is so obsessed with work that even when he takes his kid on a boy scouting trip, he is thinking about “The Goal”. I understand that the author used it as a device to explain the notion of a “bottleneck” process in business, but I can’t help but notice that Alex fails to find balance in his work life and personal life.

Balance being the key word here.

A long time ago after I finished reading Meyer’s “Breaking Dawn” I was furious! I completely disagreed with that ending and thought it was stupid. I couldn’t really voice it to anyone because that would require me to admit I read all the Twilight books. = /

On the other hand, as it turns out… after reading The Goal I could talk about it only. I  was seeing the Jonah that following week. He was teaching a class for about a dozen people. Here is how the conversation went, just before class as everyone was sitting down:

“Professor, I read The Goal this past weekend. Great book.”

“You did? Great! What did you think about it?”

*surprised* “Outdated? What do you mean?”

“The Goal is to make money…but life isn’t about making money.”

“Nah… even at the corporate level, maybe the goal used to be making money but nowadays it is about the triple bottom line. And by definition, sustainability has to start at the core and all three elements are equally important.

*gets mad* “No! The goal is to make money! That should be everybody’s goal”

“Let’s agree to disagree.” [pause] “Professor, why do you think I buy coffee for the whole class every week?”

Like I said, the professor above is a great guy. Energetic, engaged and knowledgeable… is he happy? I really don’t know. I am.

Money should never be a factor. About a week after the exchange above, I was talking to one of my very religious employees. He is an older gentleman and has that Obi-Wan-Miagi sort of aura. 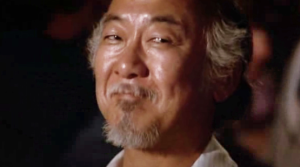 I told him how much I admire the emphasis his culture puts on helping complete strangers. He put his hand on my shoulder and said, “THAT is the GOAL in life. To make someone else’s life better. Not just your family… not your friends… someone ELSE. If you can do that every day, you are going to live a long life.”

I can’t argue with that. Shouldn’t companies think like that too? The successful ones already do. That GOAL is the driving force behind corporate sustainability.

After reading the book I sat down and wrote a little short story. It takes place during a humble funeral 20 years after the end of The Goal. Alex Rogo passed away, his daughter didn’t show up and his son is sitting on a bench outside the house. Jonah (still alive, but very old) shows up and they talk about the goal in life. They talk about balance.

I will not post the story here. That would be sacrilegious. I will, however, mention that in my short story Alex Rogo was very successful and made tons of money at the cost of distancing himself from his family. All that money was invested with someone else who believed that the goal of any company is to make money.

He had all his savings invested with Bernie Madoff. 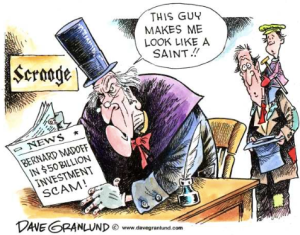 (in my story, Bernie is Bottleneck-Herbie’s father)

What is your GOAL?

Regardless of what it is… Are you satisfied in the pursuit of your goal? Try helping a complete stranger today. If it makes you feel good, get a co-worker a hot cup of coffee tomorrow.