I am not sure this is something every married man can observe, but it is certainly true in my case: my wife is always right. By “always”, I mean she is right most of the time… but I think she rounds it up from 51% to 100%.

It is near impossible to argue against someone who is always right, but that doesn’t mean I don’t try. Every now and then, the fates conspire, stars align and the universe  turns the table in my favour. Yesterday was one of those days.

After giving up trying to find a parking spot at Yorkdale Mall on Boxing Day, we decided to head for lunch and catch The Hobbit at The Queensway. We shared a pizza at Artisano and for whatever reason started talking about Mandela, discrimination and povertism. We talked about how different countries deal with the matter .

We made counter arguments when we talked about discrimination in Japan… As always I was losing the battle, so I looked up movie times on my phone and decided to do a quick switch, instead of watching The Hobbit we bought tickets to watch 47 Ronin. 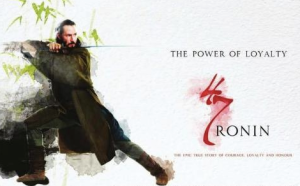 The last words she said before we entered the movie theatre were, “I can’t believe they cast Keanu Reeves. He can’t be a samurai!” I laughed inside… victory was mine: as it turns out, the movie deal precisely with that matter: The samurai class in Japan telling Keanu Reeves he cannot be a samurai because he is only half Japanese.

My wife discriminated against poor Keanu when she said he can’t be a samurai!!

Throughout the movie I felt like I won the argument we had earlier during lunch, but I actually understand her point. Hollywood previously cast Tom Cruise to be The Last Samurai, they cast a non-Japanese actress to start in Memoirs of a Geisha, and not long ago Brad Pitt starred in The Mexican.

When the movie ended I decided not to touch on the subject again. We went across the street for dessert at Spin. There was only one young waitress there and I counted seven tables full of customers.

I noticed the waitress was rushing and running all over the place to get the work done. I asked my wife what she thought about that and she said, “I like it, it shows that she cares. We should leave her a good tip for working during the holidays.”

At work I ask my team not to rush but the wife could not possibly be wrong back to back. She used to wait tables so she really knew what she is talking about. When I left the tip, I said “Good job!” and walked away.

Outside I was chastised for saying “Good Job” instead of “Thank You”. Wife argued I am a customer and not her boss. I did not want to argue conceptual semantics, specially after she said my comment sounded like I am above her. The server was almost in tears when she saw the tip, so I guess no harm no foul.

Why can’t I praise people outside of work using the same rules? Does it mean a lot less coming from a customer?

That got me thinking. Should I tell people at work “Thank You” instead of “Good Job”? I read recently that the role of a manager is to make their employees feel good. Which response would make them feel better?

I am really curious. I think I am going to survey them and find the answer.

I say “good job” at work only in exceptional circumstances, when someone exceeds expectations when it comes to their scorecard. Perhaps I should be more generous with my praises.

Just before Christmas I went to shake a guy’s hand to wish him happy holidays, and he handed me the paper he was working on. I had to actually say out loud, “I am shaking your hand” in order to make it happen.

The jury is still out on the “Thank You” VS “Good Job” remark. Wife is winning the argument. She said I sounded like an old grandpa when I said, “Good job!”

« Subliminal Messages and early 2014 Reading List
Once the musical: “Those who live in fear…” (no spoilers) »